Over the last year or so, I have been found myself being drawn to more and more model rocket and flight control system related videos on Youtube. The desire to make things and program code has taken hold again after a few years of very little, due to moving overseas with work, changing countries and of course the family growing up.

This attraction to this sector has probably been fueled by the rapid progression from companies such as SpaceX, and the achievements they are reaching. I have to admit that watching that Falcon Heavy launching the Tesla Roadster into space and the booster rockets landing under propulsion and synchronized, did give me goosebumps the first time I watched, and still does on the reruns! Now, they have the Starship program on the go.
From simple water powered bottle rockets, to the record breaking amateur rockets that are reaching over 200,000 feet (PHX4 Rocket), these are all fascinating to watch.

It is more that just the launches that fascinate me. It is the engineering that goes into them, the trial and error, the failures, the frustrations and then of course the celebrations of success as the crafts make the way towards the sky.

The passion these individuals display towards this field, and the time they take to produce content that keeps the likes of me watching and wanting more is amazing.

There is one person in particular, who continues to impress me with this level of pure determination. His tenacity knows no bounds. I find his videos simply amazing. The detail into which he goes to explain the problems, the quality of the the videos, and most importantly the problems he fights through to put objects in the sky! That person is Joe Barnard of BPS.Space. Watching how over the last 4 years he has gone from just trying to get something off the ground to in flight programs, to trying to land boosters like the ones used on the Falcon Heavy program. Below is an example of one of Joes' videos, this is his silo launch creation, but I definitely recommend you check out his channel.

So, Joe.......this is probably mostly your fault, or at least that's my excuse!

My youngest daughter also goes through different phases of interest, yes we went through the whole slime thing, and she does also watch TKOR (The King of Random) and Mark Robber and a few other similar channels, and has a creative mind when it comes to making things and how things work. She came into my home office one day and did the usual 'what you doing' and so we were blethering away and I happened to show her a simple water powered bottle rocket. I never prompted her or said anything, simply just played the video. This was met with much enthusiasm, so I said off the cuff, "do you think we should have a go at trying to make one when I come home from offshore next month?" Well, guess that is what we will be trying to do in November!

And this is how Whoosh.Space has come to be. I have no idea where it will go, what it will have or where it will end up. Only time will tell. Armed with a soldering iron, a 3D printer (still in its unopened box), hot glue gun and a little bit of curiosity, anything can happen.

To Reach For The Stars Takes More Than Just Long Arms 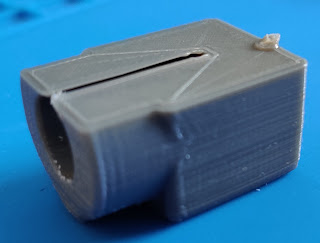